The Unauthorized Playlist is available now! 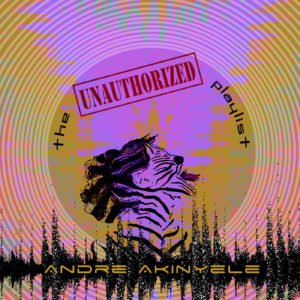 Almost two decades into his music career, André Akinyele remains a magnetic and viable presence in the music industry. With pristine vocal arrangements on top of an ol’ skool vibe, The Unauthorized Playlist uses underground hip-hop, funk, and futuristic sounds to explore the madness of keeping secrets, the anger of friendship betrayal, and the rise of self-empowerment. A worthy contrast to his earlier works—including Metal Skin and Ivory Birds (2015) and The Potomac Syndrome (2012), as well as his jazz/funk efforts with his band Gemini Soul and rock band Looking for Lester—The Unauthorized Playlist takes cues from contemporary hip-hop, R&B, and “neo-soul” visionaries, such as Pharrell Williams, Erykah Badu, and D’Angelo, to create a distinctive consciousness. The Unauthorized Playlist is sexy, direct, and intimate with songs like “After Dark,” “Turnin’ Me To Stay,” and “Midnight,” with the latter evoking R&B/Soul singer Maxwell. The Unauthorized Playlist backs away from the typical mixtape scheme and introduces a playlist concept. Put on your headphones and bounce, as The Unauthorized Playlist is one of André Akinyele’s most electrifying, eccentric works.

Copyright © 2023 THE OFFICIAL WEBSITE FOR DJ GLORIA. All Rights Reserved. Theme by Another Amazing Site